I guess most people have seen the video with the sleeping father, who suddenly catches his baby daughter before she falls off the couch. It looks like superpowers –or at least super senses.
But is it something everyone gets, when they have children? Or perhaps in different ways?

When I was pregnant I developed a super sensitivity towards smoke and in that way I became a human smoke detector. Even the smallest amount of smoke from burnt food or someone with a cigarette passing by in the street, gave me a huge amount of nausea and I could immediately feel food in my stomach speed back up though my throat. I’m not quite sure if it’s a superpower, but it’s definitely quite a smart skill for the body to react that way on things that are harmful for the fetus. 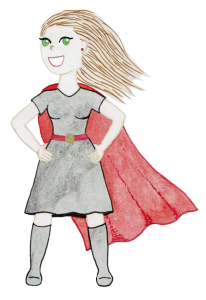 I’ve also had a couple of weird experiences since Philomena was born.
One day while she was a round baby, she was laying on her play mat and played while I cooked. I couldn’t see her because some cupboards where in the way. Suddenly I had a weird feeling that something was very wrong and I rushed to her. She had ripped a hole in the play mat and put some of the stuffing in her mouth, so she couldn’t breathe. Luckily I got it out quickly and she was fine again.

When she was older and went to daycare, I had a weird sensation one day when I took her there. A weird feeling, that something bad would happen, but I tried to ignore it since it was silly. A couple of hours later the daycare called me and said Philomena wouldn’t use her arm. She and another girl has been in a fight, because they both wanted to use the slide (of course you can’t both use it 😉 ) and Philomenas arm had dislocated. Luckily it wasn’t that bad and the emergency room doctor fixed it quickly.

But I wonder what happens? Do you get such a symbiotic relationship with your child that you can sense it unconsciously?

What do you think causes this?
And have you also experienced having super powers or super senses with your kids?